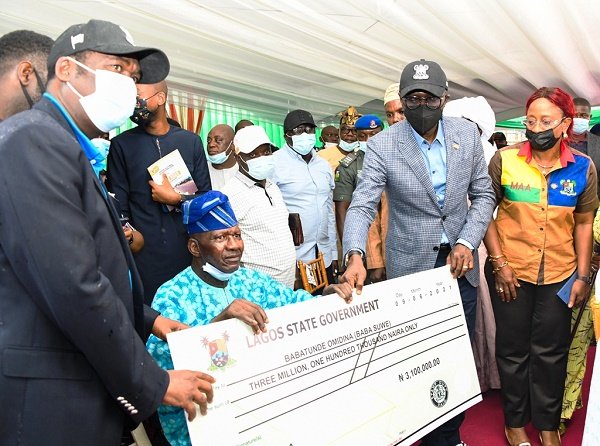 The Lagos government has presented a cheque of N3.1 million to Babatunde Omidina, Nollywood actor better known as Baba Suwe, as compensation for the demolition of his property in the state.

Baba Suwe was among the residents of Ikorodu who were compensated after their properties were demolished to pave way for the ongoing Igbogbo-Igbe road expansion project.

Babajide Sanwo-Olu, the state governor, on Thursday, presented the cheques to the affected property owners at the commissioning of the newly upgraded 6.05 kilometres Ijede Road (Itamaga to Ewu Elepe).

Among others who also took a cut of the fund are Malok Petrol Station with N100 million, Stir Oil and Gas Petrol with N36 million; as well as Igbe Central Mosque at Degolu Junction with N8 million.

About 455 affected families, worship centres, and businesses were listed for compensation to the tune of N2.2 billion in places where the state is executing construction projects within the suburb.

Born in 1958, Baba Suwe began acting in 1971 but came into the limelight after he featured in a movie titled ‘Omolasan’.

He became more popular after he featured in ‘Iru Esin’, produced by Olaiya Igwe in 1997, and thereafter starred in many other films.

Having dazzled in the limelight for several years, the comic actor’s ordeal began after he was arrested in 2011 by the National Drug Law Enforcement Agency (NDLEA) and allegedly tortured on suspicion of ingesting cocaine wraps.

Although a Lagos high court had ordered that Suwe be compensated with the sum of N25 million after no drugs were eventually found on him, the veteran actor lamented years later that he did not receive such funds.