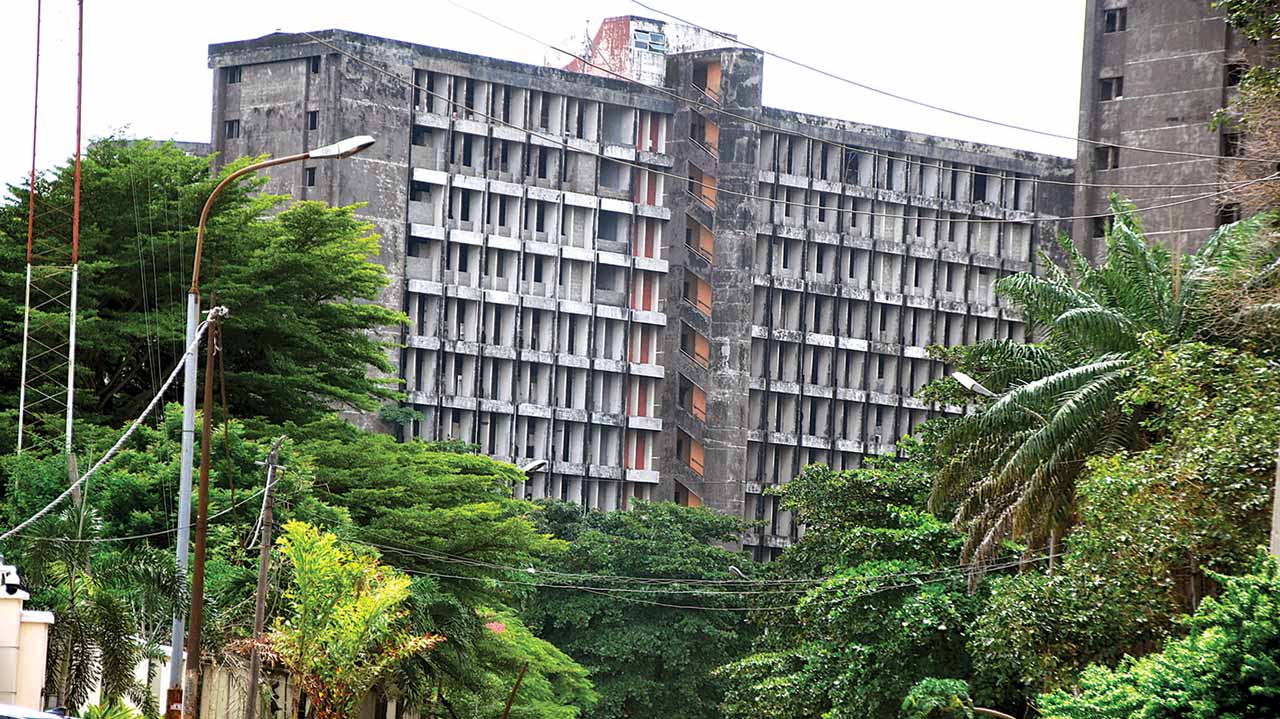 It is no longer doubtful to say that the old Federal Secretariat in Ikoyi Lagos has become a national embarrassment.

Observers say for a majestic edifice in the heart of a city like Lagos to lie fallow speaks volumes about the people and their leaders.

The secretariat was a project of the General Yakubu Gowon-led government. It was started in 1975 and has two buildings.

It was envisioned by the then federal government to cater for the administrative needs of the country when Lagos was the federal capital. To fund the execution of the project and make it a reality, the government reportedly sank N7.2billion at a time the nation’s currency was still strong into the project, the secretariat was never completed, and was abandoned when the federal capital was moved to Abuja.

Overtime, the secretariat, once a status symbol of civil servants in the country, have been converted to a criminal hide-out, a place where ammunitions are kept and illicit drugs are sold.

LEADERSHIP Sunday discovered that criminal activities now thrive in the massive edifice both day and night.

As the appropriate authorities and stakeholders remain unconcerned on the state of the buildings left for over two decades in the wake of the court case between the federal and Lagos State governments, criminals have taken advantage of the situation to turn it to their haven.

Residents, mechanics and vulcanizers around the two buildings told LEADERSHIP that the secretariat means different things to different people at different times.

Our correspondent discovered that the policemen usually seen by the gate in the day time usually disappear from duty by 7pm, leaving criminal activities to thrive.

A resident told LEADERSHIP on condition of anonymity, “The government made a big mistake to leave this building like this. If you come here at night you will see a lot of things going.

“You see vehicles driving in and out from 11pm, 1am and the same vehicle returning at about 4am. These things go on daily and nobody is monitoring them. The Community Development Association here has been told that these people store arms and ammunition here, but they are afraid to confront them. Residents are not safe.”

Findings revealed that the property had been left in limbo since 2006 when the then Minister of Works and Housing under former president Olusegun Obasanjo, Dr. Olusegun Mimiko, sold it to a private company, Resort International Limited (RIL).

It was gathered the buildings were to be restructured into a massive residential quarters consisting of four, three and two bedroom flats, among others.

Though nothing tangible has been done to show the seriousness of the investors, the Dr. Wale Babalakin-led RIL reportedly won the bid for the secretariat with an investment of N7.2 billion.

The delay in carrying out their plans, LEADERSHIP learnt from reliable sources, is as a result of a litigation process instituted by the Lagos State government which opposed the idea of converting an office complex into a residential area.

Our correspondent learnt from a top Lagos State government official that the state faulted the sale on the premise that the complex is too large to be used for residential purposes because it could distort the original plan of the locality.

The official said, “This matter is in court and the government whether at federal or state level, is bound to respect the rule of law. This secretariat was designed as an office and administrative complex. That is people resume for work and close at the end of the day.

“Now, somebody just wakes up from Abuja and says we are making it residential quarters without minding the implications of such a decision, without consulting the municipal council and the state government that will bear the brunt of such a decision. The matter is in court and the country’s judicial system will look into it.”

Although their roles in the entire process are not very clear, checks showed that the arrangement carried out during the administration of Chief Olusegun Obasanjo did not go down well with prominent Lagos indigenes and monarchs including the Oba of Lagos, Oba Rilwan Akiolu.

They were said to have supported the move by the state government to challenge the matter in the court using their knowledge of the law to point out loopholes in the federal government’s action.

As the property is left to rot away, public opinion however has it that the fortunes of the nation could be better enhanced if structures like that are put into the right use.

Our correspondent observed that some parts of the premises have been overgrown with weeds, giving the feeling that the premises could be harbouring dangerous reptiles.

Realtors have said the value of the asset, including the land and the physical structure, is about N40 billion, as it stands on a prime location like Ikoyi which is one of the most expensive locations in Nigeria.

They pointed out that the litany of abandoned government properties in the country shows that the country harbours a culture of endemic waste, whether in terms of property, other resources