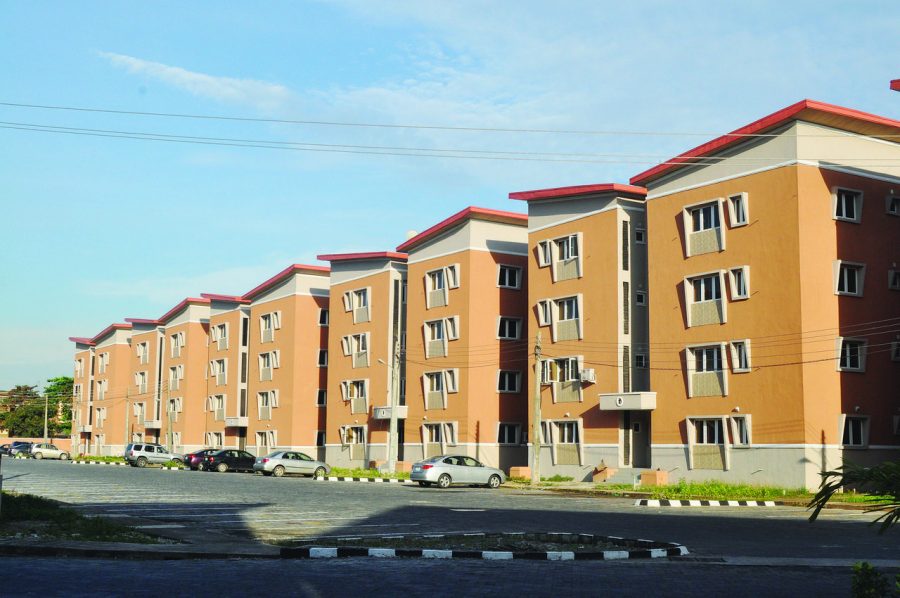 There is no gain saying that Nigeria, the most populous black nation with huge population and perhaps the fastest urbanising country in the African continent is bedeviled with housing challenge.

Nigeria is estimated as at 2015 to have housing deficits of approximately 22 million and it is also projected that about N59.5 trillion will be required to remedy the gap in this sector.

Though the issue of figure has been a source of disagreement between the government and stakeholders in the sector, but the fact still remains that the country is in deficit. This much, the Vice President, Prof. Yemi Osinbajo agreed to recently when he said the government is committed to addressing the deficit.

Osinbajo also gave details of what the government has done so far in addressing the housing deficit challenge, which include the introduction of a programme tagged; Affording Housing Development and Management Initiative, which aimed at reducing housing deficit through collaboration with public and private entities.

The Vice President who spoke at a public function in 2020 explained further that the initiative would boost the housing economy, increase National Housing stores and promote cooperatives, management of public buildings, hostel accommodations and deployment of unoccupied houses for either development schemes or rental initiatives.

More so, he said, it would encourage development/modelling of all buildings to modern needs and cities, urban renewal/generation community upgrading among other things.

He also mentioned that the pilot project was expected to commence in October 2020 in Gwagwalada, with the construction of about 2500 housing units under Public Private Partnership involving private developers.

Besides, the government towards the end of 2020 kicked off its planned 300,000 low cost housing programme across the country with the Nigeria Police Force.

The police force are to benefit 2,000 from the planned programme. The initaitive which is under the National Social Housing Programme (NSHP) is coordinated by Family Homes Fund (FHF).

With the government efforts not withstanding, the general notion has been that the government has not done enough to lead the charge in the provision of affodable housing for the people, especially in a country with a fast growing population.

Another school of thought still has it that for Nigeria to overcome its housing deficit, the government must spend heavily in the sector as it has double advantage to stimulate the economy.

Speaking on the housing deficit, the Association of Housing Corporations of Nigeria (AHCN) was of the opinion that it is the responsibility of the government to champion the efforts at addressing the housing deficit in the country.

Social housing all over the world is essentially driven by government and it is seen as the responsibility of government to the governed, the President/Chairman of Council, Association of Housing Corporations of Nigeria (AHCN), Dr. Victor Onukwugha said.

In this regards, Onukwugha was of the opinion that both the states and federal government have done very little over the years to respond to social housing and address increasing housing deficit.

A pip into the performance of states in the area of provision of housing for their citizens shows that little has been done in the last three years. According to Dr. Onukwugha, some states have not done anything under the period in review, while some have done little.

To push home his analysis of the efforts of the states, the president of AHCN categorized the states into three ports.

States that embarked on Housing Projects

According to the State of the nation’s housing address by Dr. Onukwugha at a recent forum, only six states-Benue, Delta, Edo, Katsina, Lagos, Niger and Ogun states have embarked on housing projects.

In Benue state, the state housing agency did a lot in the last three years except for the ongoing 20 housing units in Makurdi. The other housing estates in the state is the proposed ANDP Housing Projects, 5000 Units Housing Project in Agatu which is to be undertaken directly by the state government but yet to commence construction. The Nigerian Army Post Service Housing Development Limited (PHDL) also has 221 units housing estate in Otukpo LGA of Benue state with FHA Federal housing estate, phase 2, in Makurdi.

The Delta State Development & Property Authority was able to develop the Heights Estate in Asaba for outright sales while Family Home Fund Limited Housing Estate in Issele-Azagba in Asaba consist of 650 units comprising 1- and 2-bedroom semi-detached bungalows in Delta state while the ministry is working on the Shelter Afrique 150 housing units in Ibuza, behind Asaba Airport with a proposal for 1000 housing units in Illah Estate.

In the same vein, the Edo Development and Property Agency is currently developing at its Emotan Gardens, Ikpoba-Okha LGA, a 1800 units gated community. The agency is in partnership with Mixta Africa Limited and the Edo State government to build approximately 2,000 housing units.

On the otherhand, in Katsina State, the Katsina State Housing Authority has embarked on an ongoing 185 housing units which started in 2018 and being developed by the agency. Also, there are other private estates in the state funded by the Federal Mortgage Bank of Nigeria.

Niger state Housing Corporation with the support of state government has developed 164 housing units in the last two years and has kick off another 1,200 units being funded by the Family Homes Funds Limited. The State Ministry of Housing is not directly involved in construction in the state but has provided enabling environment with state backing for the State Housing Corporation to function effectively.

And in Ogun state, two agencies- Ogun State Investment and Property Corporation (OPIC) and the Ogun State Housing Corporation did well enough to provide affordable housing for the people of the state. OPIC has so far under the year of review developed various housing estates across the state.

States that have not embarked on Housing Projects

Bauchi state over fifteen years merged its housing corporation with the ministry and has not done anything spectacular in affordable housing though some projects were executed with some private developers in recent past.The state does not have any State Housing Agency since the merger of the corporation years back.

The Ebonyi State Housing Development Corporation does not have anything for the 10 years outside the new 100 housing units to be funded by Federal Mortgage Bank of Nigeria in Abakaliki.

In Gombe, the Gombe State Housing Corporation has not done anything in the last four years. Since its name was changed from Gombe State Investment and property Development Corporation in 2015, the board of the corporation is yet to be constituted.

In AkwaIbom, Imo, Kebbi, Kogi, Nasarawa, Osun, Rivers and Zamfara states, the various State Housing Agencies have not embarked on any housing projects within three years.

In Ondo, the Ondo State Development and Property Corporation has not embarked on any serious massive development since 2015 and;

In Oyo state, outside the recently commissioned N2.5 billion Ajoda Housing Estate projects consisting of 360 housing units, the state has not embarked on any housing projects in the last eight years.

States that embarked on sites, units and estates other than housing projects

In Abia, The state housing agency- the Abia State Housing and Property Development Corporation has in the last three years concentrated on site and services of land in most its estates. The state was only able to develop 50 units at its Industrial Market Housing Estate in Umuahia of the 3,000 units proposed for the estate.

The Anambra State Housing Development Corporation in the last two years concentrated on site and service with two of its budding estates at Green Valley estate and Liberation estate known as Diaspora village. The Awka Millennium Smart City (AMC), Housing Estate which is under construction at about 30% is being handled by the state ministry without involvement of the corporation.

In Bayelsa, apart from the ongoing 192 units at Okaka in Yenagoa which started recently and the 34 units already completed out of the 700 units in Agbura Housing estate, the Bayelsa State Housing and Property Development Authority has not really done anything to address the housing demand in the state in the last two years.

In Cross River, the government however was able to complete directly 52 units of 2-bedroom housing for Internally Displaced Persons’ housing estate in Bakassi through the Ministry of Social Housing. Meanwhile the state housing agency, CROSPIL is concluding arrangements with the FMBN for the development of 200 housing units while working on preliminary arrangement with REDAN for development of 150 housing units in the state.

In Ekiti, only 20 units were developed at Afao Housing estates in the last two years. Another 231 units is being proposed for development in Ado Ekiti, Federal Housing Estate, Ado Ekiti, 70 housing units.

In Enugu state, apart from the 20 units developed in Rangers Estate, the Enugu State Development and Housing Corporation has engaged in site and services in the last three years. Among the estates that is almost built up by the allottees are WTC Estate, Fandview estate and Citadel estate all in Enugu.

Kano State Housing Corporation which operated under Ministry of Works and Housing was last year moved to a new ministry under Housing and Transport. However, there was Family Homes Fund intervention in the state with the development of 757 units of 2- and 3-bedroom flats and 3-bedroom detached bungalows in Family Homes Estate, Darmanawa, Kano under Public Private Partnership programme without involvement of the State Housing Agency.

The State Housing Agency, Plateau Invest and Property Company Limited has not embarked on any housing projects in the last three years after completion of 27 units of PIPC Estate in Jos four years ago. The agency only concerned herself with sites and services within this period.

After the five units developed in 2014, the Sokoto State Housing Corporation has not embarked on any housing project in the last three years. However, the Ministry of Housing is currently developing 2 and 3 bedroom in Sokoto without involvement of the State Housing Agency.

Since the merger of the housing corporation with the Ministry of Housing and Urban Development in 2003, Taraba state has no housing agency. Between 2003 and 2006, the ministry was able to develop 569 housing units while 441 housing units were developed in all 16 local government of the state between 2006 and 2007. By 2007, the housing arm of the ministry was merged with the newly created Ministry of Work, Housing and Transport. The state in 2017, planned to execute 5,000 housing units in Daniel Darius Ishaku Gardens, as at now only 59 units were completed. As part of its renewed efforts to reposition housing provision in the state, the government has decided to recreate its State Housing Agency and the State House of Assembly is about finalizing the enactment of the new bills for the creation of the agency and;

In Zamfara state, the last project developed by the Corporation was the 100 units of 2 bedrooms at Zanna Zakariya Housing Estate, Damaturu in 2011. However, the ministry has been embarking on various development in the state and the last attempt being a planned 1800 housing units of 2 and 3 bedrooms to be funded by Family Homes Funds.