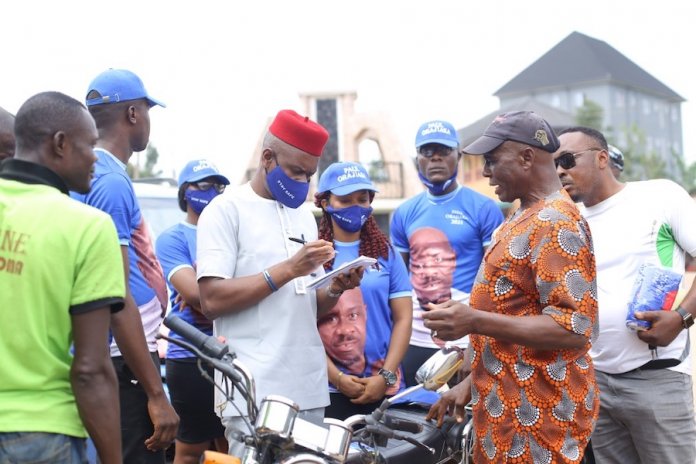 Bad road networks, inadequate power and water supply are among the biggest challenges of Anambra residents, a survey has revealed.

The survey was part of efforts by the foundation to have a better understanding of the immediate needs and challenges of residents of the state.

Led by Paul Orajiaka, a governorship aspirant on the platform of the All Progressives Congress in Anambra State, the survey team traversed all the 21 local government areas of the state, including villages located in difficult flooded terrains where there were practically no access roads.

Respondents, who included farmers, petty traders, students, businessmen, teachers, lawyers, doctors among others, within the range of 18 to 65 years, were interviewed by the survey team over a two-month period.

Of the over 2000 residents interviewed, 55 percent identified a combination of bad roads and inadequate water and power supply as their major challenges and insisted that the current administration had done very little to tackle the problem.

About 32 per cent of the residents who also identified with the challenge of bad roads, inadequate water and electricity supply however pointed to insecurity, lack of effective educational and health care facilities and poor water drainage system in both urban and rural areas as their biggest challenge.

A fewer number of the residents interviewed singled out security and lack of good governance as factors constituting major setbacks in their everyday effort to eke a living for themselves.

The statistics were slightly different in each of the local government areas surveyed as residents in the communities pointed out more specific needs in which they would appreciate government assistance.

In Onitsha North Local Government Area for instance, security was a major issue residents pointed to while poor electricity supply and bad roads constituted their second and third biggest challenges.

In Onitsha South Local Government Area, over 85 per cent of residents interviewed stated that their major challenges in order of priority were bad roads, insecurity, poor electricity supply and unemployment. Burden of high tax payment was also a problem that they grappled with.

While Orumba North and South also share equal challenges of bad road networks, epileptic power supply and unemployment, insecurity, poor drainage system and lack of drinkable water were the least in their order of needs.

In Anambra East and West Local Government, bad road networks and poor electricity supply were among their two major challenges while in Dunukofia local government area, unemployment and bad roads were their top priority.

Orajiaka, speaking on the study, said there was often an assumption that the challenges of indigenes of every state were well known without any deliberate steps to understand the nature and geographical distribution of those challenges.

He noted that the survey was necessary for his campaign organization as a working tool in drafting a manifesto that would reflect the needs of residents in all parts of the state.

“What we have done is to undertake an approach that most politicians rarely think is important. For us to understand what the real challenges of our people are, we went to towns and villages to speak to them one-on-one. Some of the places we visited were practically impassable.

“The journey was indeed an eye opener because we were able to experience what the people go through everyday due to bad roads. In a particular community we visited, there was practically no sign of government presence. Every community we visited had their own peculiar challenge and we have taken note of those issues.

“In the coming days, we will be unveiling our plan for residents of Anambra and you can be assured that this survey report which has been put to thorough statistical analysis by renowned researchers and academicians working with our team for the greater good of Anambra will reflect in our manifesto. Our people deserve someone who understands their needs and I believe with the findings we have made, tackling their needs would not be much of a problem.”

Ghana’s unstable building problem is about more than lax regulation

How The Pandemic Will Shape The Workplace trends Of 2021

Why some tech companies and billionaires are leaving California