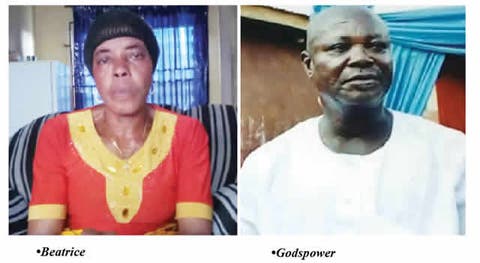 Sixty-year-old Godspower Awunor, a driver in Benin City, Edo State, has been missing for over two months since telling his wife, Beatrice, he was going for a job. Beatrice speaks to the press about how her husband mysteriously went missing on August 4, 2020

How did your husband go missing?

Around 1pm on August 4, 2020, my husband called me on the phone. I observed that he was calling from a very noisy place, so I asked him where he was. He said he was with a friend and that the friend wanted him to do a job. I asked if it was one of his former colleagues from a company he once worked with and he said no; that was when his phone went off. I didn’t call him back because I felt everything was okay. He didn’t sound like he was under any kind of pressure. So when I got back home around 7pm, I was surprised not to find him at the spot he normally sits at the back of the house.

Did you immediately think something was wrong?

I asked the children about their father’s whereabouts but none could give me an answer. My last child told me he cleaned his father’s shoes that afternoon before he went out but didn’t bother to ask where he was going. I also asked them if someone came to the house to see him but they said nobody came home. Surprisingly, his phone was switched off, which had never happened before. At this point, I became worried but my three sons taunted me as I was afraid that something could have happened to their dad.

They also said their dad’s mobile phone charger was faulty and that he might not have got a chance to charge his phone. Despite this, I called his number throughout the night but his phone was switched off.

Had he ever gone out and not returned home at night?

While he was working as a bulldozer driver at his former place of work, he would work for several days without coming home. He lost the job when the company closed down over a year ago. So, I was happy when he told me that someone called him for a job. I asked if he was a friend I knew from his former place of work or someone new but he did not give me a reply till his phone went off.

Two days after we lost contact with him, we went to Textile Mill Police Station to make a formal report; the case was later transferred to the state Criminal Investigation and Intelligence Department office. I told the police that he didn’t tell me where he was going, the job he was going for and who called him for the job. The police immediately told me it was a difficult case. But they sent radio signals to other police stations in Benin, Edo State to know if he had been arrested for any crime, but we didn’t get any news.

What did you do after that?

After four days, I visited his hometown – Ubulu-Uku, Aniocha South Local Government Area of Delta State – to tell his kinsmen about what happened but till now, we have yet to hear from him after two months. He did not tell me the person he went to meet or gave a phone number before his phone went off on that fateful day. When he was about to leave that morning, I had no premonition that something bad would happen to him, which was unusual  because I always feel it if something bad is about to happen.

Do you think it was a case of a business deal that went wrong?

Eight years ago, while still working with his former company, the owner gave some of his dedicated members of staff plots of land. Many of his former colleagues have built houses on theirs but he wasn’t fortunate enough to develop his own plot of land.

One day, one of his sons overheard him negotiating with someone who wanted to buy land so he called me and I came home with annoyance and told my husband that he wasn’t going to sell the land. I told him that our condition wasn’t so bad such that we had to sell the land to fend for ourselves. I promised him that I would always do all I could within my means to take care of the family until he got a new job. I also told him not to sell the land because of the children.

Did he sell the land?

I was bitter after finding out that he had sold the land. I cried for two days. He asked if I liked how he stayed at home without a job and being taken care of by me. He assured me that he would buy a car that he would use for transport business. I reminded him of how his first car got damaged due to his carelessness but he promised that it would be different this time and I gave him my best wishes.

But a week after selling the land, everywhere was locked down due to the coronavirus pandemic and interstate travel was banned. I knew that my husband was not good at keeping money so I called his daughter to talk to hm about the danger of spending the money on frivolities.

He then promised to travel to Osun State with one of his friends to buy a car as soon as the ban on interstate travel was lifted. I insisted that he should buy the car in Benin but he said it was cheaper in Osun and that he bought his first car there. A week after the ban on interstate travel was lifted, I reminded him of the car but he kept giving excuses and at the height of it, he told me that transport business was not lucrative before he finally left home without a trace.

Do you know if he has another wife or a mistress?

It is difficult to trust men when it comes to issues like this. He got a woman pregnant when we had to wait for 10 years before we had our second son. He brought the woman in with her child and when I asked him who she was; my husband told me she was his wife. It was a painful experience and I threatened to leave him but after much pleading and persuasion, I stayed back and had three boys after.

What has been the outcome of police efforts to find him or know what happened to him?

When we reported to the police, they tracked the line at the office of one of the telecommunications outfits in the country and one person who called him in the morning on the day he went missing has been arrested and is in police custody. According to the call log, my husband also called one of his brothers in Aba, Abia State. I was the person he called last and the call tracking revealed that he was at Oluku when he called me but the man in custody was arrested in Okwai.

That person has been in detention for over four weeks. I went to see him; he said he was the one who repaired heavy machines and trucks when my husband was at his former company. He said he sold a spare part to the company for N600, 000 before it folded up and had not been paid the balance of N200, 000, which belonged to another man who supplied the parts.

How difficult has it been for your children to cope with their father’s disappearance?

It is only God that has been keeping us going. The house rent is due and we have not been able to pay. I hope he comes back someday because we all miss him.