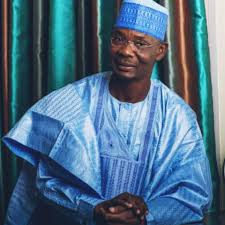 Engineer Sule signed the two bills into law at a brief ceremony at the Government House, on Thursday.

The event was witnessed by members of the state executive council, the legislature led by the Speaker of the Nasarawa State House of Assembly, Rt. Hon Ibrahim Balarabe, as well as the CEO/MD of the Nigerian Mortgage Refinancing Company (NMRC), Kehinde Ogundimu, amongst other top government functionaries.

In a remark shortly after signing the bills into law, the Governor described the two new laws as foundation for the take-off of the state’s friendly business environment, stressing that without the laws, it will be difficult to attract lots of investors into the state.

According to the Governor, the Nasarawa State Investment Development Agency, will facilitate the establishment of a one stop shop for all kinds of investments, where government will assist investors towards realizing their vision.

“Once you are there, they will do the run around for you. And you tell them what type of investment it is, registration of your company, understanding your taxes, what kind of benefits you will have, what kind of wavers that are going to be available to you. What does it take for you to acquire land, what does it take to get your documentations, what is there to get your C of O,” he stated.

The mortgage and foreclosure law, on the other hand, will promote liquidity.

“For housing, it’s going to fast track the process of creating all the legal issues on mortgages and the issue of timely resolution of all kinds of disputes that are likely to happen,” Engineer Sule said.

The Governor used the opportunity to the government team, as well as the MD of the Nigeria Mortgage Refinancing Company and his team, for coming up with the blueprint that led to the signing of the two bills into law.

Engineer Sule equally commended the Nasarawa State House of Assembly, particularly the Speaker, Rt. Hon Ibrahim Balarabe, for the prompt consideration and speedy passage of the bills into law.

Earlier, the MD NMRFC, Kehinde Ogundimu, described the event as a milestone not only for Nasarawa State but the country as a whole, adding that the signing of the two bills into law is the laying of a solid foundation for investments and greater things that will come to the state.

“There is a direct correlation between legal framework and amount of investments you have in a state. Now that we have the legal framework, we will not relent in attracting investment to Nasarawa State,” Ogundimu said.

Also, in an opening remarks, Special Adviser to the Governor on Investment and Economic Planning, Barrister Ibrahim Abdullahi, said industrialization or investment can happen in a sustainable way only through the creation of enabling legal and regulatory frameworks.

“This is the promise of Engineer Abdullahi Sule as enshrined in the Nasarawa Economic Development Strategy (NEDS), to create a private sector led and competitive economy for our state,” the SA said.