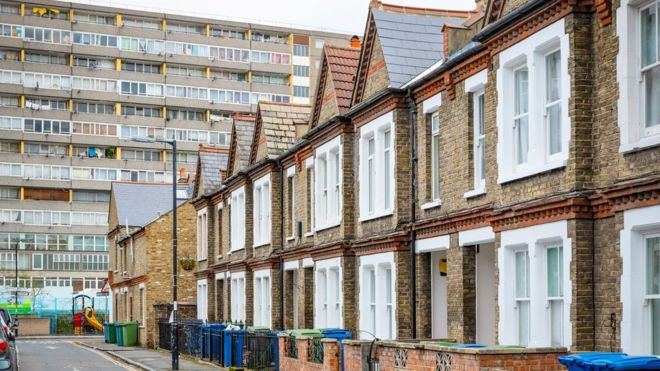 An estimated 8.4 million people in England are living in an unaffordable, insecure or unsuitable home, according to the National Housing Federation.

The federation said analysis suggests the housing crisis was impacting all ages across every part of the country.

It includes people facing issues such as overcrowded housing or being unable to afford their rent or mortgage.

The government said housing was “a priority” and it had delivered 430,000 affordable homes since 2010.

The research, carried out by Heriot-Watt University on behalf of the federation, used data from the annual Understanding Society survey of 40,000 people by the University of Essex.

The figures were scaled up to reflect England’s total population of nearly 56 million.

Some people may have more than one of these housing problems, the federation said.

People were considered to be living in overcrowded homes if a child had to share their bedroom with two or more children, sleep in the same room as their parents, or share with a teenager who was not the same sex as them.

Homes where an adult had to share their bedroom with someone other than a partner were also considered overcrowded.

After her relationship with her husband broke down, Anna spent five months trying to find somewhere to live with her four-year-old daughter in south-east London.

Although she was working full-time in social care, she was shocked at how difficult it was to find someone who would rent to a single parent.

Even when Anna found somewhere she felt she could afford, landlords would not consider her because her income was less than three-and-a-half times the monthly rent, while others refused to let to someone with a child.

“It was virtually impossible,” the 36-year-old told the BBC.

“I remember seeing one house for £1,400 a month which was literally a corridor in a basement – it was so mouldy and humid.

“But they still said I didn’t earn enough to be able to afford it.”

“It made me feel really powerless and frustrated,” she added.

Anna said she was “losing all hope” when a friend offered to rent a house to her below market rate.

“I don’t know what I would have done if a friend hadn’t been able to help me out when I needed it,” she said, adding that she still doesn’t feel completely secure.

“I just have no idea what I’ll do if my friend needs to rent her house out at full price in the future.”

The report also estimated that around 3.6 million people could only afford to live decently if they were in social housing – almost double the number on the government’s official social housing waiting list.

Social housing rents are on average 50% cheaper than from private landlords, contracts are more secure and many properties are designed specifically for older people with mobility issues, the federation said.

Kate Henderson, Chief Executive at the National Housing Federation, called for “a return to proper funding for social housing”.

“From Cornwall to Cumbria, millions of people are being pushed into debt and poverty because rent is too expensive, children can’t study because they have no space in their overcrowded homes, and many older or disabled people are struggling to move around their own home because it’s unsuitable,” she said.

A spokesman for the Ministry of Housing, Communities and Local Government said in 2018 the government built more homes than in all but one of the last 31 years.

It has also cracked down on rogue landlords, banned unfair letting fees and capped deposits – saving renters at least £240m a year, he added.

May 13, 2021 0
the Lagos State government has promised to deliver the ongoing 21 housing schemes on schedule, to bridge the...

South Africa’s ‘silicon valley’ has over 450 tech firms and employs...