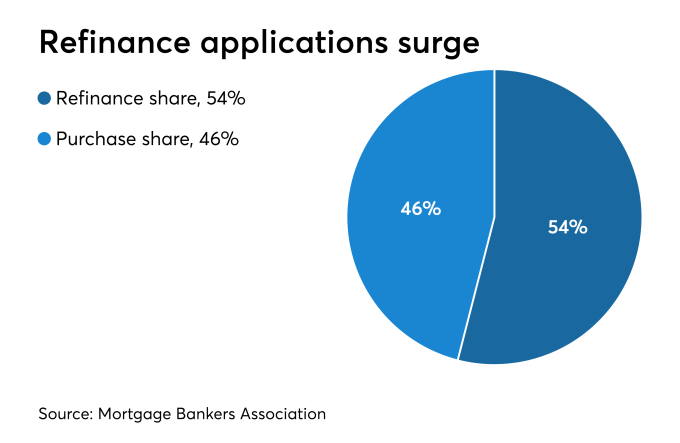 The economic tensions between the U.S. and China drove interest rates down last week, leading to a surge in refinance applications, according to the Mortgage Bankers Association.

And with the benchmark 10-year Treasury yield falling under 1.6% at one point Wednesday morning, more declines in mortgage rates are likely in the near term.

Mortgage application volume increased 5.3% on a seasonally adjusted basis from one week earlier, according to the MBA’s Weekly Mortgage Applications Survey for the week ending Aug. 2.

“The Federal Reserve cut rates as expected last week, but the bigger influence on the financial markets was the beginning of a trade war with China. The result was a sharp drop in mortgage rates, which will likely draw many refinance borrowers into the market in the coming weeks,” Mike Fratantoni, the MBA senior vice president and chief economist, said in a press release.

“The 30-year fixed-rate mortgage fell to its lowest level since November 2016, and the drop resulted in an almost 12% increase in refinance application volume, bringing the index to a reading over 2,000 — its highest over the same time period. We fully expect that refinance volume will jump even higher this week given the further drop in rates. Lower mortgage rates did not pull more homebuyers into the market, as purchase volume slipped a bit last week.”

Adjustable-rate mortgage activity remained unchanged at 4.7% of total applications and the share of Federal Housing Administration-insured loan applications decreased to 11% from 11.3% the week prior.

The share of applications for Veterans Affairs-guaranteed loans increased to 12.8% from 12.6% and the U.S. Department of Agriculture/Rural Development share remained unchanged from 0.6% the week prior.